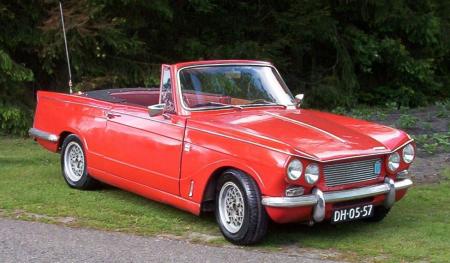 Had to sell my Herald 12/50 to make space for this one…..But what a car! It’s built from at least 4 or 5 different cars, Mk2 Saloon chassis, Mk1 grille, Herald 13/60 dashboard (because it was converted from RHD to LHD), Mk1 tail, Mk2 bootlid……But the best of all, tuned engine from a 2500TC Saloon and 4.11 diff……Yes, it is frightingly fast……No topspeed, but acceleration is breathtaking. Spend half the day chasing modern cars…….

January 2006: Had to sell the car, I simply had too many cars, I now have only one Triumph left, the Mimosa Yellow Dolomite Sprint………….. Last I saw of it were some disturbing pictures: It is now back in Belgium where I bought it and it now bright pink (yes pink!!) with a red stripe….. I dis miss it and wanted it back, but not in pink!