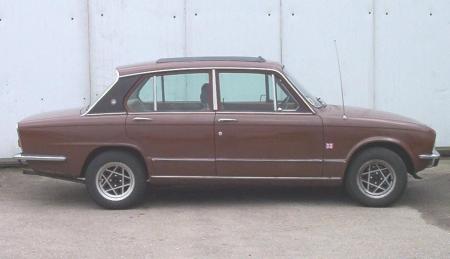 Although I only had the car since late February I had to sell it again……..Needed money for a Vitesse 2500 Convertible.
I sold the car to a good friend, who had owned Dolomites before, and he’s still very happy with it. I did keep the wheels though………..
January 2006: My friend decided to clean up his garage, so a couple of British motorbikes had to go, and also, regrettably the Dolomite. He sold it to a trader who advertised it on a Dutch website, I don’t know where it is now………… Has been advertised for a while but haven’t seen it for a while. I’m afraid no one wanted it and that it’s been scrapped…… Update July 2011: My fears probably came true because the license number is no longer registered with the Dutch DVLC. That means it’t almost certain that it’s scrapped.