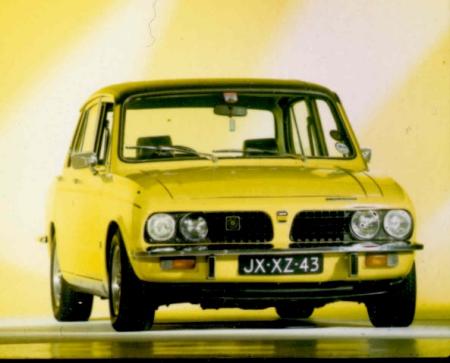 Bought in England in Oct 94. Earliest Sprint in Holland. Although of course not the earliest original Dutch one…Featured in Dutch magazine Automobiel Klassiek in Oct. 96. On the cover of my copy are the autographs of Dolomite Race and Rally drivers Tony Pond, Brian Culcheth and Tony Dron. I met them on the 75th anniversary meeting in 1998 in Gaydon, England. Restored by former owner in 1990. Still in good condtion. Original British registration was KNR 259L, later re-registered TNR 508L.
July 2005: After a new APK (Dutch MOT) problems start: The overdrive is only working whem it feels like it, and the ignition gives trouble, so I put the car in the garage for a couple of weeks, or at least that was my plan….
April 2006: The Sprint finally sees daylight again, after nearly 10 months the battery wasn’t flat and the engine started almost immediately!! One happy Jan!! I brought the Sprint to a guy from the Dutch Club who has 3 Sprints and so has a lot of experience in working on them. And he works for a classic car garage and is a certified APK mechanic. He’s going to sort it out. Let’s hope for the best….
June 2006: Got the car back with new APK, cost a small fortune, but all the troubles it had for the last couple of years due to lack of maintenance have been solved. Now in the future some rust issues have to be dealt with, there’s rust on the drivers side A post, a bit on the roof (underneath the vinyl) and the bottom of the boot is not as solid as it used to be……..But I save that for later………..Now it’s time to enjoy it this coming summer……….
May 2007: on it’s first outing it packed up with a broken fuel pump (I think). Put it in the garage and due to lack of time it it still there now with the tow rope still attached to the front, and it’s now July 2008……….
It’s now July 2011 and it’s still in the garage with that towrope on the front…………