TVR AJP8 4.2 engine/gearbox is finally in the Sprint,
Well sitting in there so I can work out the mounting’s,
It’s tight I’m going to move the servo/master cylinder and the clutch master as well this will be fitted inside the car giving more space under the bonnet.

It’s proving to be a bit of a challenge as part’s are getting hard to get.
What with also the rumour’sTVR are going under doesn’t help thing’s either.

14/10/2006
Finally got the use of my Brother in Laws Workshop so I can get round and start making all the trickey bit’s Engine and Gearbox Mounting’s.
Turret’s as already mention will be trimmed back so I can use the standard Cerbera Eexhaust manifold’s.
Gearbox tunnel will no longer be a removable one as I going to fabricate a new one and weld it in place for more strength,
The Salisbury Rear axle that I won of EBay will be narrowed and fitted with a more respectable 3.45:1diff with LSD,
The axle already sport’s rear disc’s so just a case of finding a suitable rear caliper assy.

24/10/2006
Brake servo and master cylinder’s (brake and clutch)have been removed along with the heater fan motor assy that use to sit against the bulk head.
New Pedal box and Master Cylinder’s have all been ordered and should be with me this Friday,That’s next week’s job.

AJP8 is now sitting in the engine bay of the Sprint on a newly fabricated gearbox mount.
Hopefully sort the Engine mount’s out tomorrow and then make room for the Cerbera Exhaust Manifold’s.
All in all not a bad couple of day’s work.

04/11/2006
Well it’s finally in there resting on the new mount’s I made,
Front’s I remade again as I wasn’t totally happy with the first set up I had.
Gearbox mounting is also all done along with a new Pedal Box (Wilwood) assy which took two day’s in itself.
Turret’s were cut back to accept the Cerbera Exhaust Manifold’s but I have decided to make my own manifold’s copying the Cerbera Manifold’s fairly closely.So the turret’s will be reinforced and rewelded back.
Starter Motor has been sourced from a Nissan Maxima and little fabrication was needed to the gearbox tunnel to accept the gearlever which has been moved rearward’s some 3/4 inches back.
Engine and gearbox now removed (AGAIN) to have a couple of heliciol’s fitted and the Tappet’s/Timing Chain checked and adjusted.
New clutch fitted and then it can be all refitted.

16/11/2006
Engine has been removed to have the helicoil’s done, But the engine had to be stripped down as there was a small crack around one of the stud’s for the head,
Sump is away being rebuilt/welded to stop the oil coming out of the BIG hole I made to fit the engine in.
Should have a couple of week’s back on it before Xmas.

09/12/2006
Engine mount’s are finished,
Turretts have been rewelded back allowing a couple of inches more room for the new exhaust header’s just need painting back to the original colour still in primer at the moment, Which will be the Cerbera one’s but altered to flow better.
Looking at how to strengten the floor around the gearbox mounting and fitting a Panhard Rod to the rear axle.
Still waiting for a couple of part’s to rebuild and then refit the engine and gearbox.

Still lot’s to do and more beside’s.
Sump, Remote Oil Filter, Oil Cooler and hose’s.
Rad and Hose’s
Manifold’s and exhaust.
Fuel pump and lines.
Engine electric’s.
PropShaft.
Suspension Spring’s.
Narrow the Jensen Salsibury 4HA Rear Axle (After the engine run in).
Learn how to drive a 420Bhp car weighing about a ton.

Finally got the cylinder head studs that I ordered before christmas(They had a problem with a batch that where snapping when being torqued up!!.
Anyway engine is slowly going back together for about the third time.
Still waiting for the sump as well.
Maybe try somewhere else!!!!!!!.

Well where do I start.

After selling my Sprint some years ago.

I’ve finally got her back.

Its getting yet another conversion this time in the shape of a Dorito . 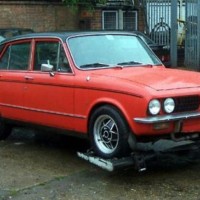 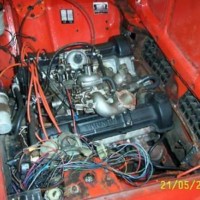 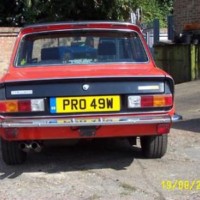 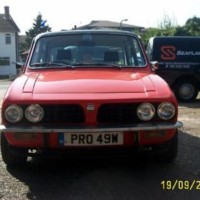 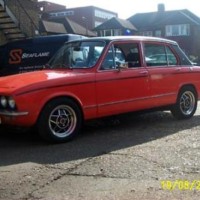 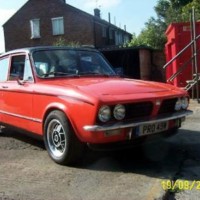 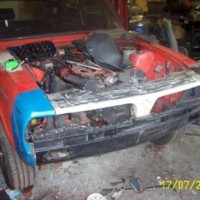 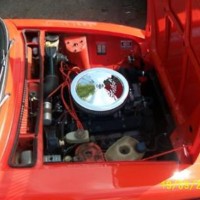 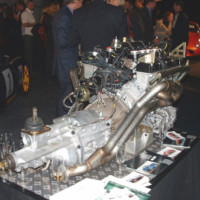 Project AJP8 into a Dolomite Sprint. Not content with the modest power output of the Triumph Stag engine I installed in the Sprint, The challenge is to install a different V8 with suitable power to impress my new quest for speed, After a call from a fellow Dolomite owner a TVR AJP8 4.2 litres of all alloy V8 was the chosen engine, Ebay come up trumps as a AJP8 was listed the same week Nearly complete missing a cylinder head/Fuel Rail and clutch assy money parted hands and I came back from Newcastle with the said engine, and collected a T5 gearbox on the way home from Oxford. Engine is almost the same size as the Stag engine but is if fact lighter than the original Sprint engine. 360Bhp 320 ftlbs torque factory figures this thing is going to fly. There's also a 4.5 lt with 420Bhp and 360 lbsft torque Stag engine was removed and the AJP8 built up with no internals and rested in the Sprint engine bay some work will be needed to make this puppy fit. Engine was stripped down and checked over for wear ETC one liner was found to be cracked along the top edge. New Piston's and liner where sourced and the crank was given the all clear so was lighten and balanced along with the new Pistons,Rod's,Flywheel,Clutch,ETC. A pair of Ex Tuscan Race Head's where located and again checked over then the engine was rebuilt again. Engine was postioned complete with overhauled gearbox in the Engine bay again and the mounting's where made gearbox one first to keep the engine assy at the correct distance from Bulkhead to rear of engine, Front mount's where fabricated but I'm not to happy with these so will remake those soon. 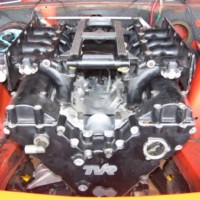 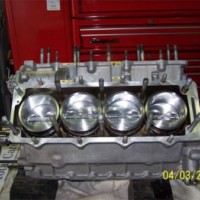 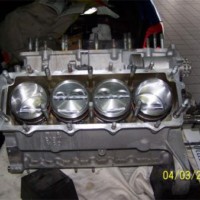 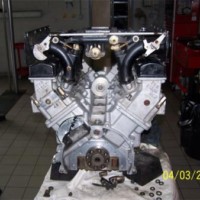 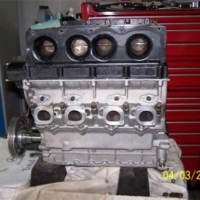 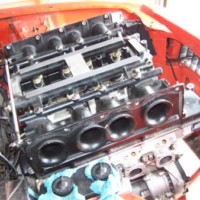 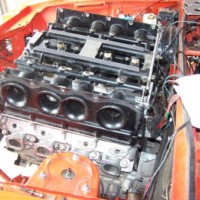 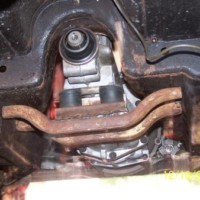 Before the TVR goes in thought it best to uprate the brakes again, Chis Wittor does a very nice brake (Vented Disc's with Four pot caliper's)upgrade for the Triumph Stag and as I'm using Stag front brakes already this has to be a easy option. Changing the Sprint to Stag brakes is fairly easy; Strip the hub assy down and get the stub axle pin's pressed out and refit Stag one's (There slightly longer), Now you need some spacer's made the inner one is 4.94mm wide by 18.94 high,the outer one is 3.55mm by 38.07, There is also another spacer 4.04mm and this goes between the hub and disc and need to be machineed to just cover the disc face(See photo's), With all this is should be a matter of just bolting it all together, You will need to use the Stag front hub's and you can not use the Sprint 13" Wheel's. Nearly forgot you will need to turn the disc down bringing the disc diameter down about 4mm from stock. AND THESE BRAKES WILL NOT FIT UNDER THE STANDARD SPRINT WHEELS. I'll do the how to do the rear's later, Does it stop any better YES, And with the bigger brakes I should think so, The caliper's are of a Jaguar so the shouldn't be a problem (Half the Weight of a Jag) 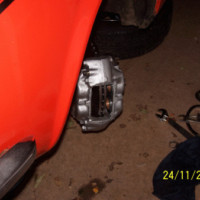 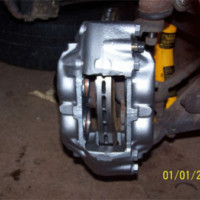 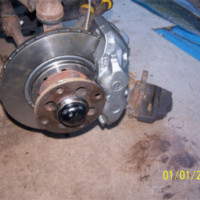 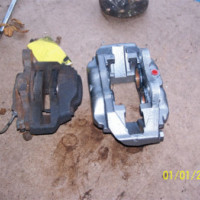 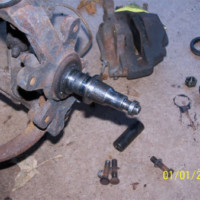 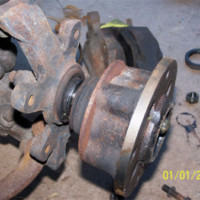 LSD is on the left, Standard Diff is on the right, First job is to loosen the wheel nut's, Then raise the Sprint of the deck supporting under the axle and sill's (Use wooden block's so you dont damage the sill's) Remove wheels and brake drum's no need to undue the brake wheel cylinder's, Loosen the bolts surronding the axle plate (1/2 spanner size) allowing the oil to drain into a siutable container,(May be easier to raise Sprint under body to make the top bolt's easier to get to) Undue the Haftshaft bolt's behind where the wheels sit remember to bend back locking tab's in any break get new one's, Slide the haftshaft out being carefull not to strecth the brake pipe's you don't need much, (You can if your doing any other work remove the brake pipe's and remove shaft's completly, Now remove back plate and mark the two bearing cap's at the top or bottom 1 2 A or B DO NOT MIX THESE UP Undue the bolt's and caps may be tight, And withdrawn the old diff unit, You may need to remove the old bearing's to use the original bearing shim's, Setting the Diff backlash is a bit trickie so consult the Manaul for this, Refit as the reverse and remember to fill the axle with LSD oil Only nothing else OOHHH and make sure its on Level ground. I go into more setting upp ETC. When I have a bit more time and I try to put a photo of what a LSD diff look's like compared to a standard diff, Good luck have fun and Take Your Time it's not a Race you know. Regard's Phillip AKA SprintV8 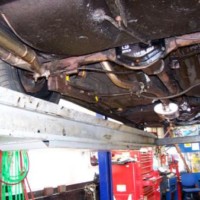 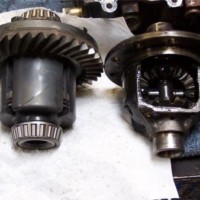