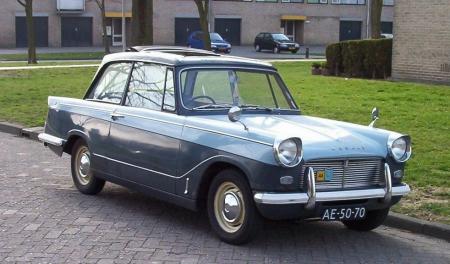 Bought from a friend in Dordrecht, Holland, who bought it a couple of months earlier in Coventry, England. Car is completely original in good condition. The paintwork is still original, although a little bit faded. It was only used until 1971 when it was taken off the road because the owner fell ill, and died later. His wife kept the car until late 1998, then she sold it to a trader in Coventry, who sold it to my friend. Original British registration was 8047 KV.
Late April 2004: I had to sell my beloved Herald to make space for my new toy: a Vitesse 2500 Convertible. I sold it to a guy I knew from the Club Triumph Holland, coincidentally the same fellow who bought my first Herald nearly twenty years ago…Some people never learn….
January 2006: Now I have sold the Vitesse I do miss this Herald even more…………….
July 2008: As far as I know still with the guy I sold it to and he’s still happy with it..
July 2011: looked at pictures and I still miss it………….