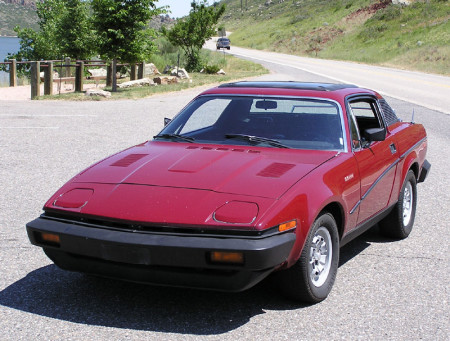 When I took possession of this vehicle, I was pleased to find out that I am only the third owner. It was purchased new in Denver Colorado and first registered in Granby Colorado. Granby is nestled high in the mountains and two years later it was traded in for another vehicle. The second owner picked it up with less than 10,000 miles on the odometer and proceeded to use it as his daily driver in Castlerock Colorado for the next 12 years. After that, it became an occasional use vehicle until I bought it in 2005. With my ownership, the car will continue its life in Colorado.

This TR8 FHC (Fixed Head Coupe) was not even on my radar when I began looking for a replacement daily driver for the Ford Bronco II that was wiped out when I was rear-ended by a Jeep doing 45mph, I happened to be stopped at a red light at the time of impact. My introduction to Triumph wedges had been behind the wheel of a friends TR7. I thought it was comfortable and handled well, it just needed more power. I knew I would like a TR8. I also knew that I would prefer a coupe. The coupe was lighter and has a stiffer body-shell and would also allow easier year round use. I figured I would someday make my own TR8 coupe by converting a TR7 coupe. But there it was, tempting me from a classified ad in the Rocky Mountain Triumph club newsletter.

It seemed to good to be true, a genuine TR8 FHC. I called the owner and made an appointment to see the car. The earliest our schedules could agree was going to be a few days (Castlerock is a two hour drive from Fort Collins). During the days before seeing the car I began to research. I found an active Triumph Wedge community. I signed up for the email list and found some very good buying guide information on one of the associated websites. I also found a guide to decoding the Chassis Commission numbers and 17 digit VIN numbers.

I quickly discovered that if this were a “true” TR8 coupe it would not have a 17 digit VIN number. It would instead have a Chassis Commission number that began with either an “ACN” or “TCN”. The “ACN” cars were considered pre-production cars and the the “TCN” cars were made in two series. The first production series was the “TCN150—” series, the second was the “TCN160—” series. Numbers of cars produced seem to be between 110-160 pre-production cars and less than 250 production coupes. Making TR8 coupes amongst the rarest of Triumph Sports Cars! Could finding a TR8 coupe really been as easy as looking in a local club newsletter. I was about to find out.

When I arrived in Castlerock to look at the car, the first thing I did was to look at the Chassis Commission number. Low and behold, TCN150015. Not only was it a real TR8 Coupe, but a very early production model. Built in December of 1978. Next, I began to check the cars general condition over. It sat level and square, and was in overall very good shape. There was some rust in the lower front wheel arches and lower front sills, the result of driving in Castlerock winters. There was also a little rust in the spare tire floor of the boot but that was all. I also spent some time crawling around the car checking all the known weak spots and places of concern, that the online buying guide pointed out. I was pleased to find that was a very sound car. Time to go for a test drive.

The owner had told me that all of the suspension was original. When I drove it for the first time, I can tell you that it felt like it was original and had covered 125K miles. In other words, it felt sloppy and tired. But it did drive straight, braked well pulling up evenly and didn’t exhibit any major problems other than the worn suspension. One other minor issue was that the shifter seemed loose and sloppy. This turned out to be bushings for the remote shifter linkage. A well known issue with the LT77 5-speed transmissions used in the TR7/8, Rover SD1 and Range Rovers.

A deal was struck and I would return to collect the car later in the week.

The car is registered as a 1980 though it appears to be considered a 1978 by BMIHT (British Motor Industry Heritage Trust) and it does carry a December 1978 build date. It seems that getting the early TR8’s to hit the moving target of emissions regulations of the time was not very easy. It wasn’t until mid 1979 that the cars began to appear at dealerships to be sold as 1980 models. This seems to bear out in several databases that only list 1980/81 models for TR8’s.

The modifications have been minimal. I did address the shift linkage bushings and the worn suspension. I fitted stiffer springs front and rear. I also fitted new shocks, new suspension bushings and increased diameter sway bars. All of that, plus some new tires, and it really drove like a sports car. Other than those suspension modifications, everything else has been centered around maintaining the vehicle. Basic tune up stuff, removing some left over 1980’s electronics such as very old, intrusive and non-functioning alarm system and an old tape deck that had seen better days.

If you have looked at the photos, you might also notice that this car has a sliding glass sunroof. Triumph introduced this sliding glass roof in the Spring of 1976. The first mention if it was in a TSOA (Triumph Sports Owners Association) newsletter, which at the time was factory publication. It was first introduced in the North Central Sales Region but was most notably used in a special edition TR7 marketed in the South Eastern Sales Region known as the “Southern Skies TR7”. The interesting part of my car having a sliding glass roof is that it appears it may be the only TR8 FHC to have been fitted with one. There is an unofficial registrar of TR8 coupes that has close to 200 accounted for. Mine is the only one on the list to have such a sunroof. There are still cars unaccounted for so it is by no means a certainty that my TR8 is the only one with a sliding glass roof. If you come across one, please pass along the information to me.

Living in Colorado I have plenty of opprotunity to exercise this car at high altitude. In one hour I can be crossing a 10,000+ foot moutain pass. In two hours I can be crossing Trail Ridge Road in Rocky Mountain National Park, a road that reaches 12,184 feet in altitude. In three hours I can be parked at the Mt. Evans parking lot at 14,134 feet. Trips to 7,000-9,000 feet in altitude are easy and frequent. So far, the TR8 soaks up these trips without question or complaint. The smooth and easy torque of the Rover V8 combined with the 5-speed transmission makes for a pleasant drive for both low and high speed cruising. It is very easy to spend the whole day driving, especially through the mountains and canyons of Colorado. 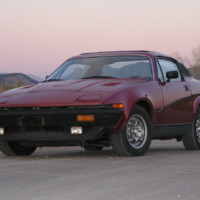 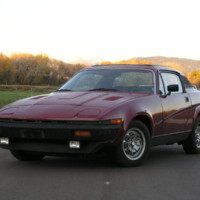 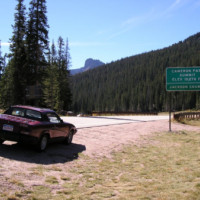 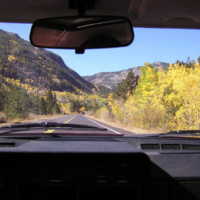 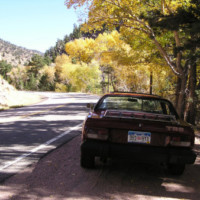 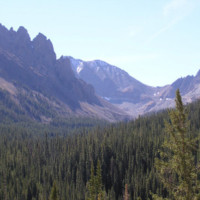 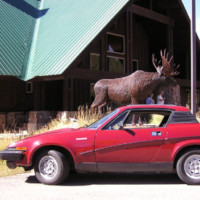 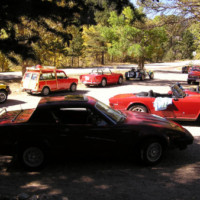 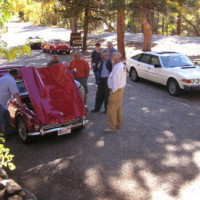 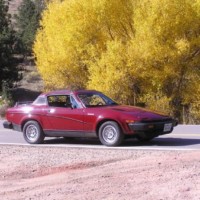 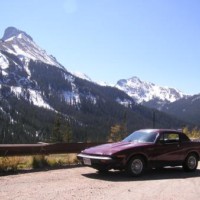 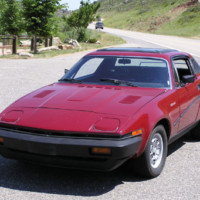 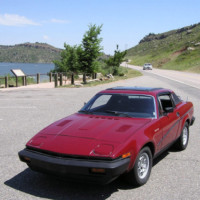 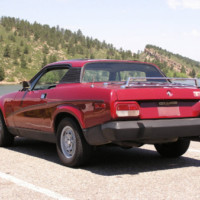 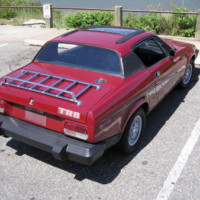 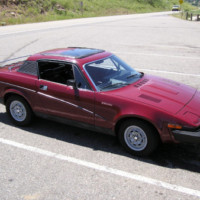 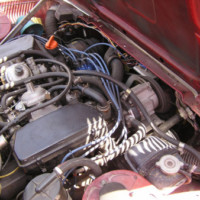 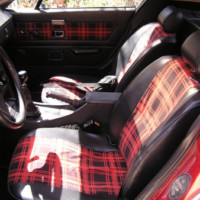 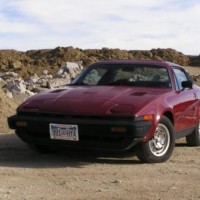